THE EXECUTIVE COMMITTEE OF THE FRIENDS OF MOUNT ATHOS

HRH The Prince of Wales

Prince Charles has been an Honorary Member of the society since 1994. It is an honour to have his ongoing support. 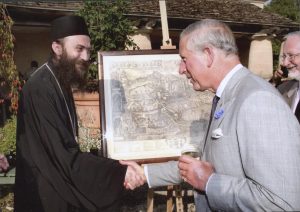 FOMA IN THE AMERICAS

His Eminence Metropolitan Kallistos of Diokleia

Since 1982 Kallistos Ware has held the titular Bishopric of Diokleia under the Ecumenical Patriarchate of Constantinople. Metropolitan Kallistos is one of the best-known contemporary Eastern Orthodox hierarchs and theologians and from 1966 to 2001 was Spalding Lecturer of Eastern Orthodox Studies at the University of Oxford.

Archbishop Elisey of The Hague and The Netherlands

A guide with advice and understanding based on the experience of fellow pilgrims.

Help support the the religious and other charitable work of the Holy Community and the monasteries.

Belong, support and do. Join like-minded people in preserving Mount Athos and its monasteries.

FOMA is a charity run by volunteers. We depend on membership subscriptions and donations to provide our support to pilgrims and the Holy Mountain.